Here I’ll explain the structure of the NFN and go through some of the math. Implementations can be found in our Open-Source Python package as well as in my repo.

Let’s start with the density model, the final part of the NFN. We are using Normalizing Flows as a way to parametrize the distribution we are outputting. This expressive family can model characteristics of distributions like heteroscedasticityThis means that the variance of \(Y\) is not constant over \(X\). In this dataset for example, the variance of Y is higher for \(X\leq0\). 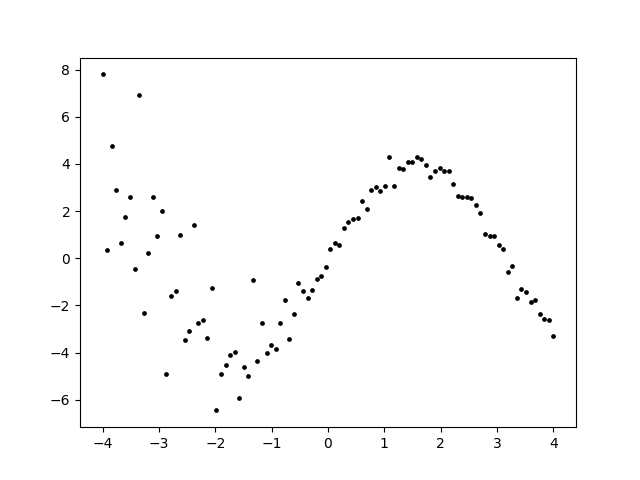 and fat tailsThe Cauchy distribution is one example of a fat-tailed distribution. Compared to a Gaussian, it has outliers that are far more likely (So far so that it’s mean cannot even be defined)..

Let’s start with a simple example: Take a random variable \(X\) distributed according to a Normal distribution with zero mean and uniform variance. What is the distribution of, say \(Y = f(X) = \frac{1}{3} \cdot X\)? Since we divide every sample \(x \sim p(X)\) by 3 to get a sample \(y \sim \hat{p}(Y)\), we can expect the distribution of Y to be more narrow, with most samples being closer to the mean than in the base distribution. 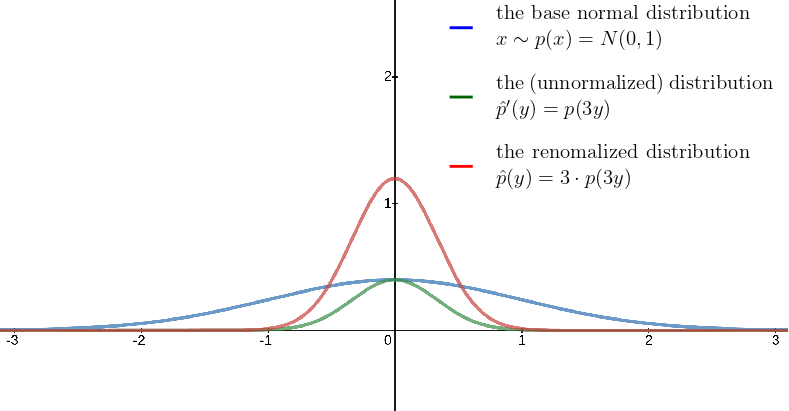 For multivariate distributions, the absolute derivate of the inverse function becomes the absolute determinant of the jacobian of the inverse function: \(\mid\det \frac{\partial f^{-1}}{\partial \mathbf{y}}\mid\).While it’s a little harder to get an intuition for why that is the case, consider affine transformations in higher dimensions. They are easier to visualize than the general case since their Jacobian is just the transformation matrix. The determinant of a matrix is nothing but the amount of volume change resulting from the affine transformation defined by the matrix. For the 2-D case, check out this applet. Image the ‘M’ as a square. Then change the transformation matrix and see how the volume of the square is proportional to the determinant of the matrix. This leads us to the main formula of Normalizing Flows which tells us how to normalize a distribution transformed by \(f(\mathbf{x})\):

This equation can be derived using the change-of-variable theorem. \(f(\mathbf{x})\) has to be continuously differentiable and invertible. Many of such functions have been proposed. For the NFN we implemented three of them that we have found to be both expressive and fast to compute: affine, planar and radial flows.We picked those three because unlike some of the recent flows like MAF or Real NVP they work especially well for low-dimensional densities.

The example I used in the beginning of this post is an instance of the Affine Normalizing Flow: 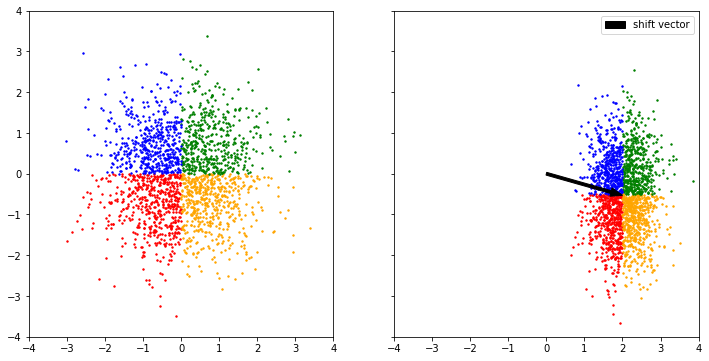 The initial 2-D Gaussian is shifted and compressed, yet stays Gaussian. \(\mathbf{a}\) controls the scaling of the distribution and \(\mathbf{b}\) is the shift vector.

Planar Flows compress and expand densities around a hyperplane: 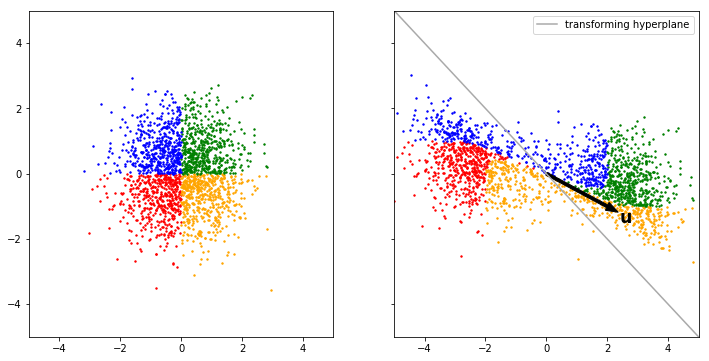 The Gaussian base distribution is split into two halfs in this example. \(b\) and \(\mathbf{w}\) define the hyperplane whereas \(\mathbf{u}\) specifies the direction and strength of the expansion.Side note: While equation (3) is invertible using the right constraints, no closed form inverse is know. Therefore in practice the inverse can only be approximated.

Radial flows compress and expand around a reference point: 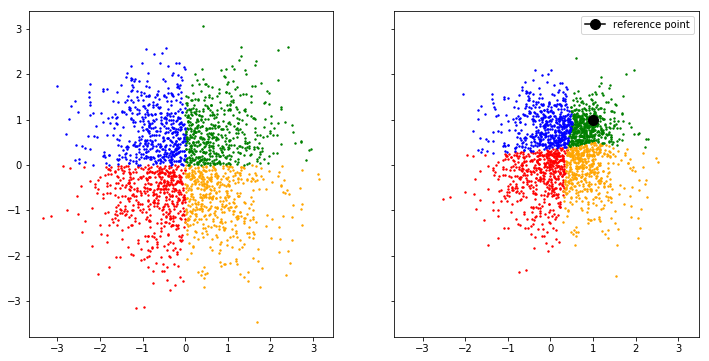 \(\gamma\) is the reference point, \(\alpha, \beta\) specify how strongly to compress / expand.

Both planar and radial flows are only invertible functions if their parameters are correctly constrained. How to constrain each flow and how to calculate the inverse log determinant of the Jacobian is explained in the documentation for my code and in Rezende and Mohamed (2015).

Applying one Normalizing Flow to a distribution results in another distribution. Therefore we can stack multiple flows to get even more expressive transformed distributionsTwo consecutive planar flows transforming an initially Gaussian distribution:

Now let’s combine the Normalizing Flows with a neural network that allows us to model conditional distributions. This concept is similar to a Mixture Density Network.For the MDN the density model is a Mixture of Gaussians, for the NFN it’s a Normalizing Flow. The NFN is used to predict the conditional distribution \(p(y|x)\).This is a generalization of regression / classification. In a regular regression task for example, one predicts y given x as \(\mathbb{E}(y|x)\). We generalize this by predicting a full distribution instead of just a point estimate. Say \(x\) is a job title and we’re trying to predict \(y\), the salary associated with it.For example for p(wage | job=’lawyer’), this conditional distribution is strongly bimodal as you can see here. Some lawyers are much better off than others. The NFN now works as follows: 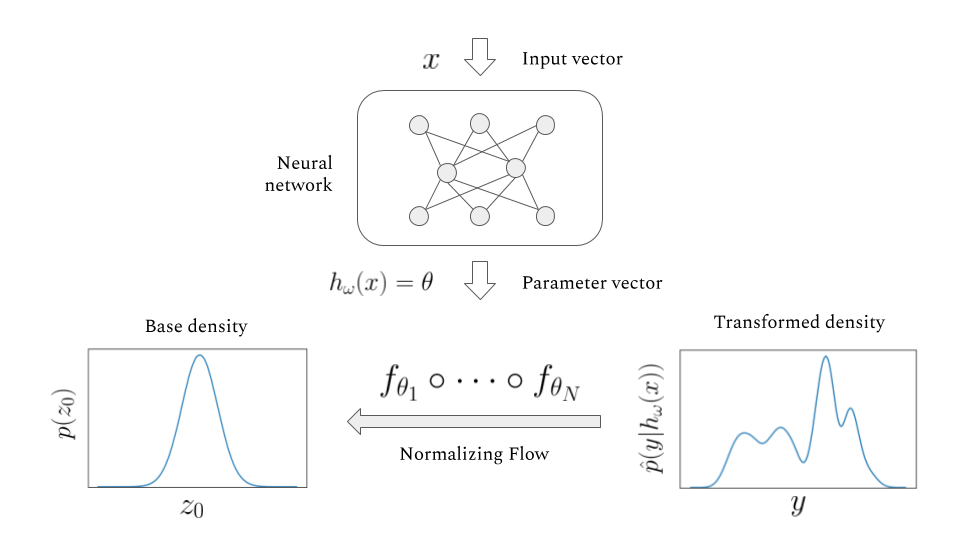 As a small detail, the Normalizing Flows are actually inverted in the NFN and point from the transformed distribution to the base distribution. This is mainly done to speed up the process, as the flows we use here we developed for posterior density estimation in variational inference by Rezende and Mohamed (2015). In their original form they are fast at sampling and slow at likelihood computation. For CDE we need the opposite.

The NFN fitted on a conditional version of the two moons dataset where \(X\) determines the rotation of \(Y\) around the origin:

Normalizing flows serve as a powerful, novel way of parametrizing distributions. In the tests in our paper we compared the NFN against the Mixture Density Network and the Kernel Mixture Network, among others. The NFN shows favourable performance on datasets that are strongly non-Gaussian, e.g. datasets that exhibit skewness and heavy tails.

You can try the NFN and other conditional density estimators on your own data using our Python package (TensorFlow 1.X) or my repo (TensorFlow 2.0).